We want to connect, learn from and work with you. 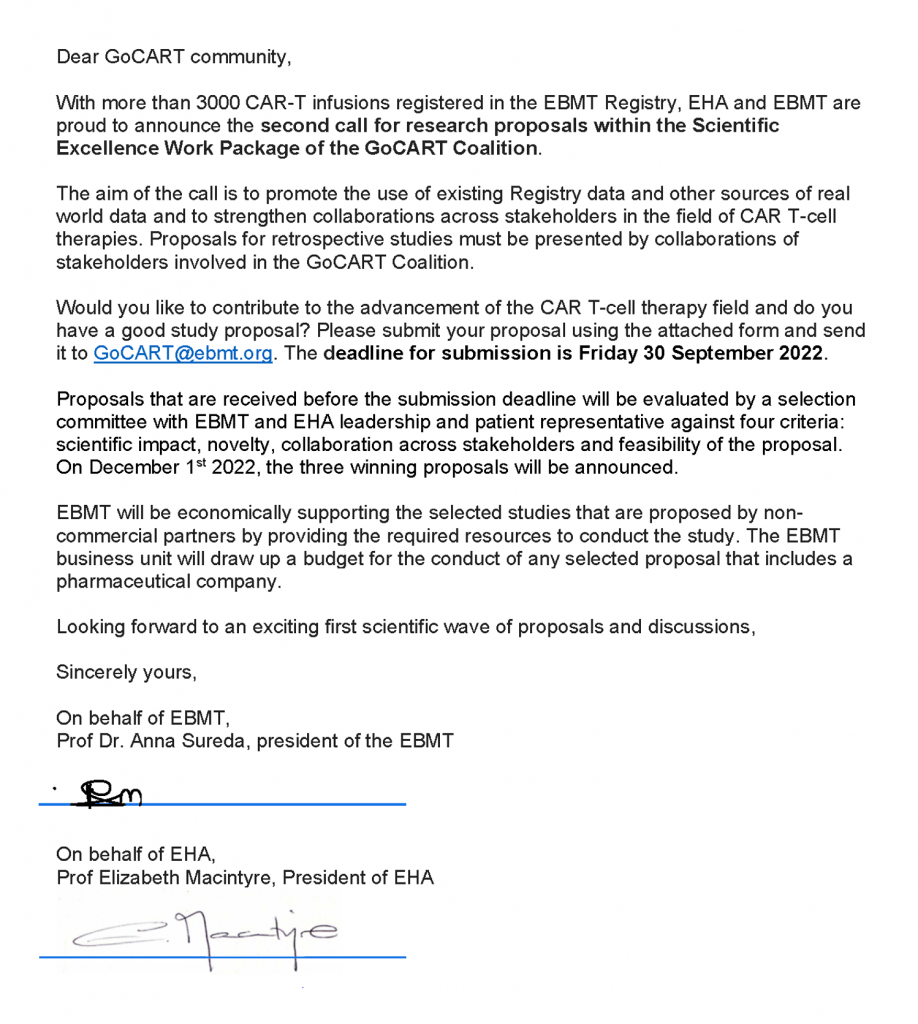 In May 2021, the first call for retrospective study proposals was released. The focus of this call was on promoting use of existing Registry data and other sources of Real World Data and on strengthening multi-stakeholder collaboration. Twelve study proposals were received. Each of the proposals was carefully evaluated based on the criteria: scientific impact, novelty, methods/feasibility, collaboration across different stakeholders/research groups by an expert panel. This panel consisted of the former president of EHA, Prof. Dr. John Gribben, president of EBMT, Prof. Dr. Nicolaus Kröger and Prof. Dr. Marcelo Pasquini Senior Scientific Director at CIBMTR, the Center for International Blood and Marrow Transplant Research in the US. Finally three proposals were selected to receive a study grant and will be carried out under the direction of EBMT working party experts. A summary of the three selected proposals is presented below:

Patients with relapsed and refractory DLBCL have a poor prognosis. Prospective studies1,2 as well as retrospective analyses3 including pooled data from prospective studies report overall survival (OS) rates between 20% and 30% at 2 years. Retrospective analyses4 as well as the only prospective study on allogeneic stem cell transplantation (alloSCT) in this situation OS rates as 30-40%. The pivotal studies as well as first real world data on the two commercially available Anti-CD19 chimeric antigen receptor T-cells (CART) , Tisagenlecleucel and Axicabtagene ciloleucel show comparable rates of long term remissions but probably significantly less acute and chronic toxicity. It is therefore an important question for clinical decision making to have reliable data on both treatment modalities in clinical practice. Within the TransCART project, we compare efficacy and toxicity of alloSCT and CART in adult patients with relapsed or refractory LBCL and will give a definition of prognostic factors for either treatment modality. The Endpoints of this study are OS (primary), PFS, RI, NRM, GHVD-free survival, incidence of neutropenia, acute and chronic GVHD (allo-SCT only). Included are patients (age >18 years) with LBCL defined as patients with DLBCL (all sub-entities and variants, primary or transformed), PMBCL and high-grade B-NHL NOS or with defined chromosomal aberrations will be included. Patients who received a first alloSCT or underwent a first CD19 CART with axi-cel or tisa-cel from 2016 to December 2020 with at least two prior lines of therapy are eligible for the primary analysis. Patients receiving allo SCT after CART or vice versa will be included in a second analysis.

Impact of preceding therapy on the efficacy, safety and feasibility of anti-CD19 CAR T-cells in acute lymphoblastic leukemia

Anti-CD19 CAR T-cells are used in relapsed/refractory acute lymphoblastic leukemia (ALL) failing at least two lines of systemic therapy. Salvage treatment preceding T-cell collection may include bispecific T-cell enhancers, immunotoxins or chemotherapy. The same may be used as a “bridge” after T-cell collection aimed to ensure patient survival during CAR-T cell-manufacturing and even hopefully reduce tumor burden before CAR T-cell infusion. The goal of this project is to retrospectively evaluate potential impact of preceding therapy (separetely “salvage” and “bridge”) on the efficacy, safety and feasibility of anti-CD19 CAR T-cell treatment in children and adults with relapsed/refractory ALL. The analysis will include the use of both, commercially available and investigational second-generation CAR T-cell products. Results of the project should help clinicians optimize their approach to patients with relapsed/refractory ALL intended for CAR T-cell therapy.

Autoimmune and auto inflammatory complications after CAR-T cell therapy – a joint study on behalf of the EBMT – ADWP, CTIWP and TCWP

Chimeric antigen receptor (CAR) T-cell therapy is an effective new treatment for many hematologic malignancies. A barrier to widespread use of CAR T-cell therapy is toxicity, primarily cytokine release syndrome (CRS) and neurologic toxicity. However, the real incidence of other immune related side effects, in particular autoimmune manifestations and hyper-inflammatory conditions like Hemophagocytic Lymphohistiocytosis (HLH), is largely unknown. We aim at describing the real burden of autoimmune manifestations after CAR-T cell administration and their treatment. To this extent, we want perform a multi-center retrospective study analyzing data available in the EBMT registry, possibly followed as second step by a specifically designed prospective one. The results of this study will provide new insights on the incidence of autoimmune manifestations and HLH, their identification and treatment. This information will help the recognition and the management of CAR-T cell-related side effects.

Previous page
Menu
We use cookies on our website to give you the most relevant experience by remembering your preferences and repeat visits. By clicking “Accept All”, you consent to the use of ALL the cookies. However, you may visit "Cookie Settings" to provide a controlled consent.
Cookie SettingsAccept All
Manage consent

This website uses cookies to improve your experience while you navigate through the website. Out of these, the cookies that are categorized as necessary are stored on your browser as they are essential for the working of basic functionalities of the website. We also use third-party cookies that help us analyze and understand how you use this website. These cookies will be stored in your browser only with your consent. You also have the option to opt-out of these cookies. But opting out of some of these cookies may affect your browsing experience.
Necessary Always Enabled
Necessary cookies are absolutely essential for the website to function properly. This category only includes cookies that ensures basic functionalities and security features of the website. These cookies do not store any personal information.
Non-necessary
Any cookies that may not be particularly necessary for the website to function and is used specifically to collect user personal data via analytics, ads, other embedded contents are termed as non-necessary cookies. It is mandatory to procure user consent prior to running these cookies on your website.
SAVE & ACCEPT